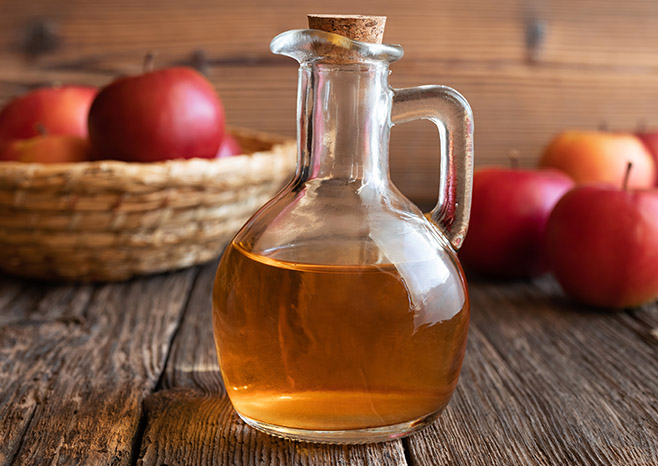 Food and nutrition trends in recent years have pointed to apple cider vinegar as being a panacea of sorts, a miracle cure-all for everything from weight loss to Irritable Bowel Syndrome to cancer. Proponents of natural medicine cite its many uses, but only a few of them actually have scientific merit, at least so far. So what does apple cider vinegar actually do for you, and is it beneficial to add some to your diet?

How It’s Made
Making apple cider vinegar is a multi-step process. First, apples are crushed into cider, the juice of the whole apple, skin and all. That liquid is then combined with bacteria and yeast, which begins the fermentation process and turns the sugar into alcohol. Next, acetic acid bacteria are added to the mixture which turns the “wine” into vinegar. If you buy an unpasteurized brand that contains what’s called the “mother,” you’ll see milky strands of this acetic acid bacteria, which gives apple cider vinegar its probiotic properties.

What Does It Really Do?
Contrary to the claims you’ll see all over the internet and in natural health publications, there are very few health benefits to drinking apple cider vinegar that are backed up by science. Here’s a quick look at the proven benefits of ACV:

Weight loss – Some studies have shown that drinking a teaspoon or two diluted in water before a meal can help you feel fuller faster, so you eat less.

Digestive health – If you typically feel better when you take a probiotic or drink/eat fermented foods, then apple cider vinegar will have the same effect.

And that’s it! Fortunately, apple cider vinegar is a delicious variety, and unless you drink it straight (don’t do this—it can damage your teeth and burn mucus membranes), won’t hurt you. If you’re new to ACV, try it in salad dressings, homemade mayonnaise, or to liven up sauces, soups, gravies, or virtually any dish that lacks an acidic component. Try several brands—they can really vary in flavor. Some are very apple-y, in others the apple taste is undetectable. You’ll also find that some types are more tart than others, so don’t give up if you try it and don’t like it. It’s a delicious addition to your dishes, even if it isn’t a magic health potion.