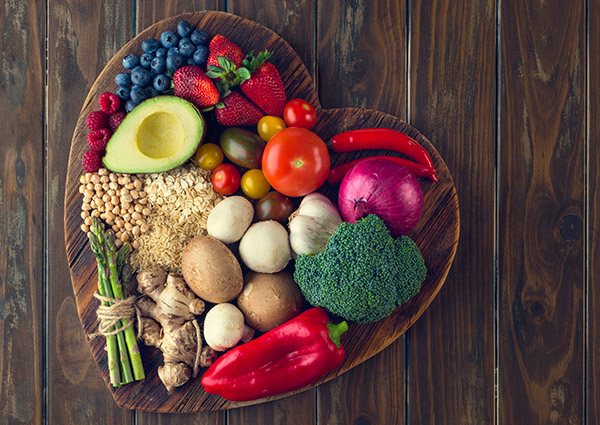 What Does Heart-Healthy Eating Consist Of?

A Cornucopia of Fruits and Veggies
Strive to eat seven to nine daily servings of produce. Try snacks such as six to 10 carrot sticks dipped in hummus; a half cup of berries (frozen or fresh) over yogurt; or a half cup of frozen spinach on a whole wheat English Muffin. Be creative – the choices are only as limited as your imagination.

Choosing the Right Fats
You want to be eating fewer saturated fatty acids found in fatty beef and other meats, and also fewer trans fatty acids, found in all sorts of packaged snack foods, including store-bought cookies, stuffing and rice mixes.

But unsaturated fatty acids, found in various cooking oils and other foods, are great for heart health – as long as you use them sparingly since they’re high in calories. Canola oil is particularly low in saturated fat. Try it in dishes where you’re not looking for a strong, oily flavor. Olive oil has a rich, full-bodied flavor. Drizzle it onto salads and other dishes where you want the oil to assert its flavor. Sesame oil works great for Asian cooking.

In terms of spreads, opt for liquid or tub margarine rather than butter or hard margarine. They’ll be lowest in the kinds of fats you’re trying to limit.

Truth on Carbs
Grain-based, high carbohydrate foods like bread and pasta have gotten a bad rap with the recent popularity of low-carb diets. Carbohydrates can be good for you; just emphasize the healthier ones in your diet.

Dairy Does It
Go for two to three servings of dairy foods every day, which help reduce blood pressure, a major risk for heart disease. That includes a cup of skim or 1% milk; a cup of low or non-fat yogurt; or an ounce to an ounce-and-a-half of hard cheese such as Swiss or Cheddar. (Hard cheese is high in saturated fat, which is why the recommended serving is on the small side – about the size of one to two dominoes.)

Go easy on ice cream, heavy cream and most other whole-milk dairy foods. Those should be the once-in-a-while foods, while low and non-fat dairy should be dietary mainstays.